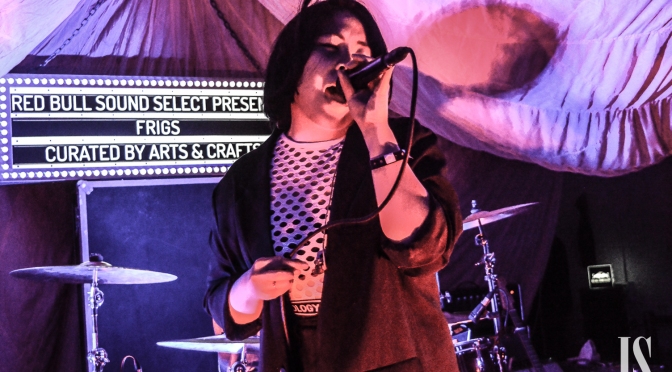 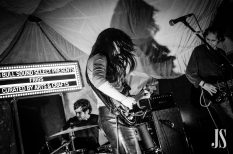 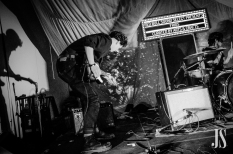 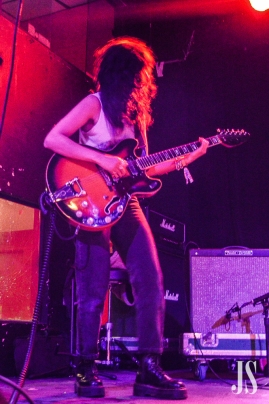 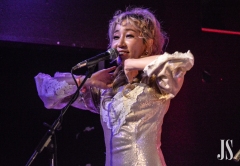 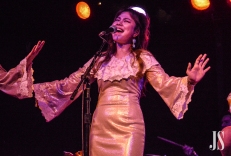 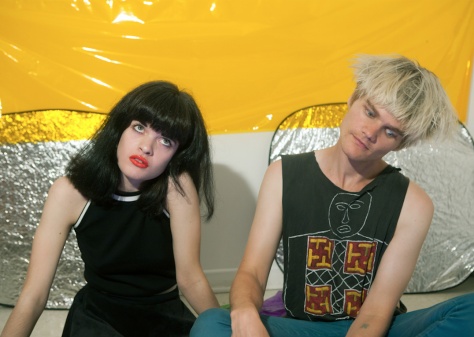 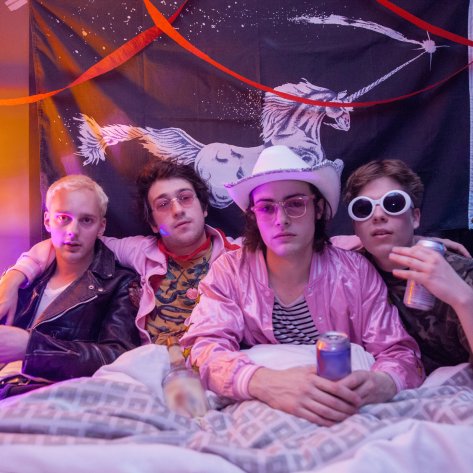 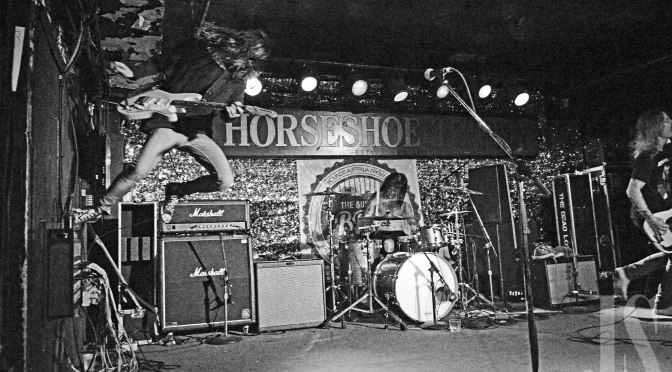 Almost at the end of Music Week The Aussie BBQ took over The Horseshoe Tavern, for a showcase literally making people jump off of the walls. The Aussie BBQ, a showcase featuring some of Australia’s best talents, had an afternoon full of loud, hair flipping, amazing bands with a sound so great it bled out onto Queen West. The show stopper of the showcase had to be The Dead Love. A three piece rock band rowdy, loud and full of enough grit to leave the audience breathless and screaming for just one more song. 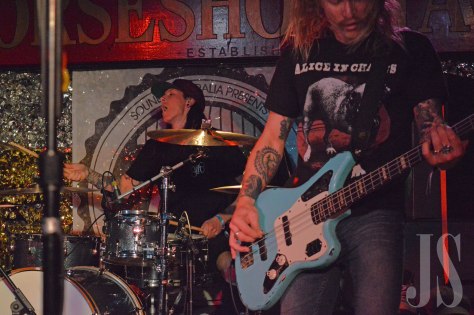 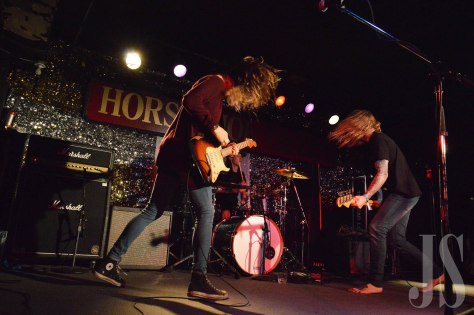 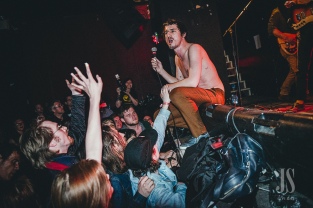 A selfish moment when the few scattered around make the evening all the more exciting. It makes capturing the magic Mothers produce so easily a bittersweet treat. More should be there to embrace the talents in the medium venues before those moments become rare.

Mothers is on stage, blue lights wash over Adelaide Hall and the oddly cool venue is taken by a powerful storm of droning guitar and the hypnotic voice of Kristine Leschper.

For anyone at the show, the scarce crowd and open space allows the ability to relax. Yet, the secret of seeing an amazing band nearly to yourself adds a personal tone to the night.

Photographers weave throughout the bodies easily taking advantage of the many angles rarely given to them in concert photography. Media watches from the back. Every now and again a phone points at the stage and a photo snaps or a video records.

The band plays, all with closed eyes, ignoring the media, and focusing on the moment. They open their eyes every now and again but they’ve lost themselves in the emotional indie-rock. The powerful trance began at the first note. The four-piece from Georgia has everyone in the room, including the bartender in the back, right there with them. They grab a hold of your mental state and take you through a world of sadness, distrust, happiness and love with songs off of their album, When You Walk a Long Distance You Are Tired. They hold your hand on the way through, the lights grow dimmer and Leschper turns her back to the crowd.

Their most interesting song It Hurts Until It Doesn’t begins and the rise of the power Mothers has over the room can be seen in the crowd. People sway, people’s eyes grow teary as the beat speeds and a tension in the room grows to a climactic end.

If there was ever a band to experience, let it be Mothers. 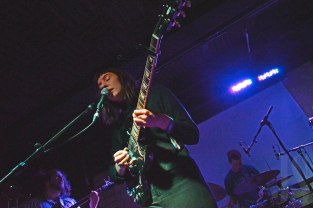 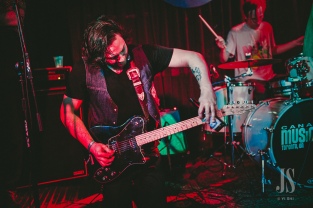 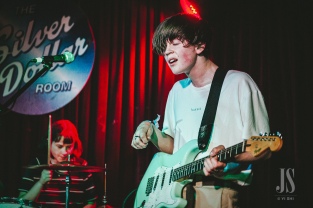 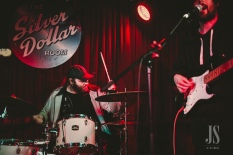 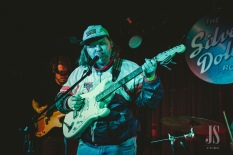 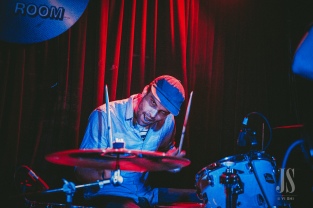 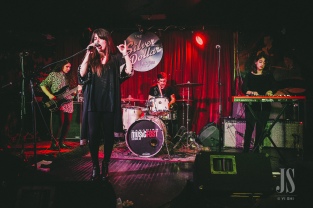 Confetti from New Swears’ set clings to the bottom of my well-worn boots. My hair is now up in a ponytail and, like most others in the crowd, full of silly string and more confetti. Though mine has that has been knocked from where it originally hung on the back of my head from someone’s foot earlier in the evening. Curses, Stuck on Planet Earth, New Swears and JPNSGRLS have all come, played, and riled up the crowd in unique ways.

Now, SWMRS take the stage sound checking. Fans scream their names, because even though Adelaide Hall isn’t full, you couldn’t find a venue more full of energy. The band responds with smiles and offer up high fives. 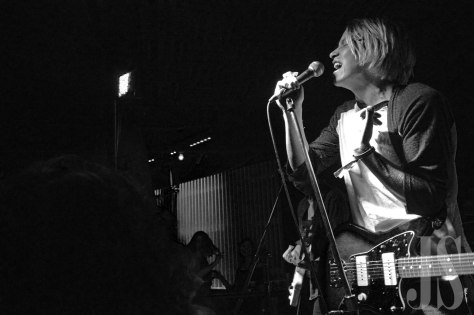 The sides of the venue are scarcely filled. Die-hard fans have waited for hours to be front row for the rowdy up and comers. The chance to see such an amazing band without “sold out” after their name doesn’t seem to be in the future, making the show all the more exciting.

Greeting the crowd with boyish smirks, they look far from old enough to be in the venue, making them all the more endearing. The Californians, Cole Becker, Max Becker, Joseph Armstrong, and Sebastian Mueller are essentially grown up Dennis the Menaces’ knowing that they’re about to cause some trouble. Someone screams from behind. No words, just a loud yell of excitement.

Kendrick Lamar blasts throughout the venue as their instruments are almost set up. Becker wanders the stage dancing along to the beat. Catching the attention of two girls center stage he shares a few moves.The crowd waits, feeding off of one another’s excitement. Then it happens.

Becker takes his place at the mic, “We’re go to go?” He says.

Hannah begins and it’s like that feeling of your mother holding your hand on the first day of school rushing around your stomach. Something new, exciting, and unfamiliar is about to happen. Yet, if you’ve listened to them before you’re instantly comforted by the familiarity of their songs. The guitar strums as they tease the crowd on the brink of going wild. The shortened version of the song ends and instantly the crowd rushes forward at the next. Stage divers rush towards the front to take their momentarily spot on stage. The mosh pit is already engulfing any inch of free space.

The set goes on as the brothers take turns sharing the mic. They scream at the right moments and from under bleached hair they create the perfect storm that is SWMRS. 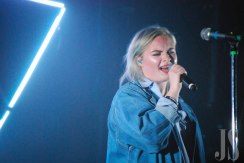 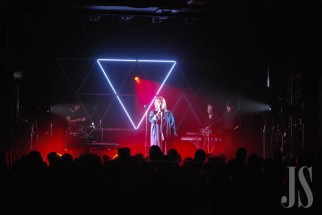 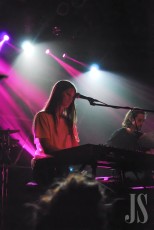 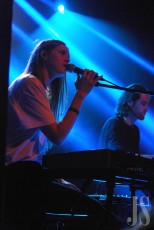 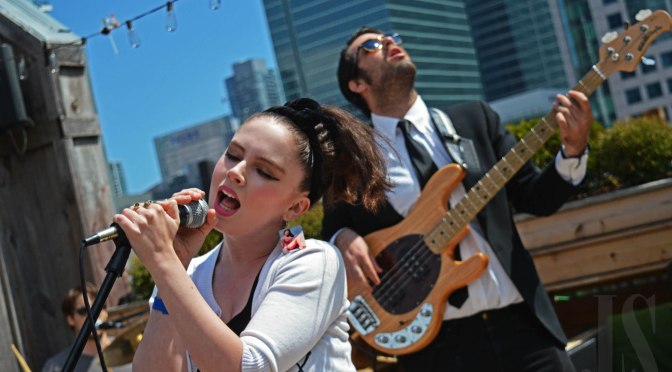 A warm afternoon mid CMW, a beautiful skyline and a special show with a surprise guest. Get an inside look at AB Co.’s rooftop party featuring Dylan Menzie, Fontains and the surprise guest HIGHS. 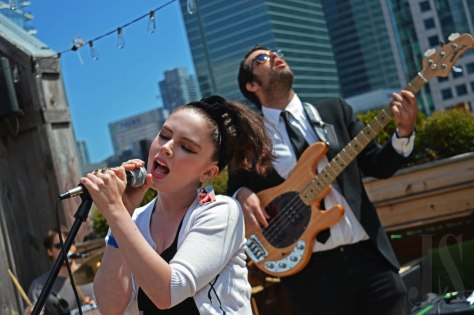 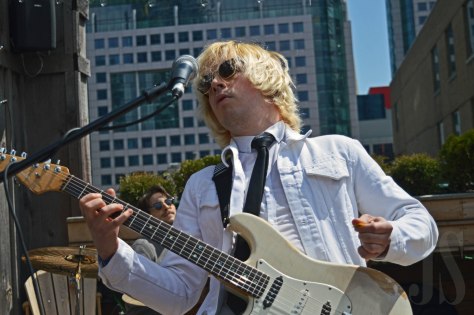 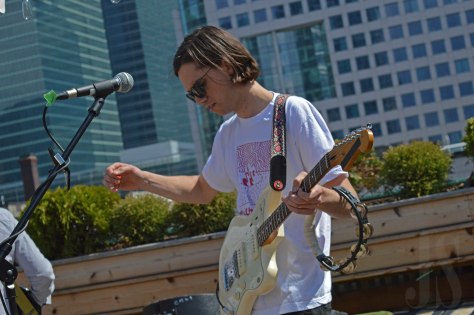