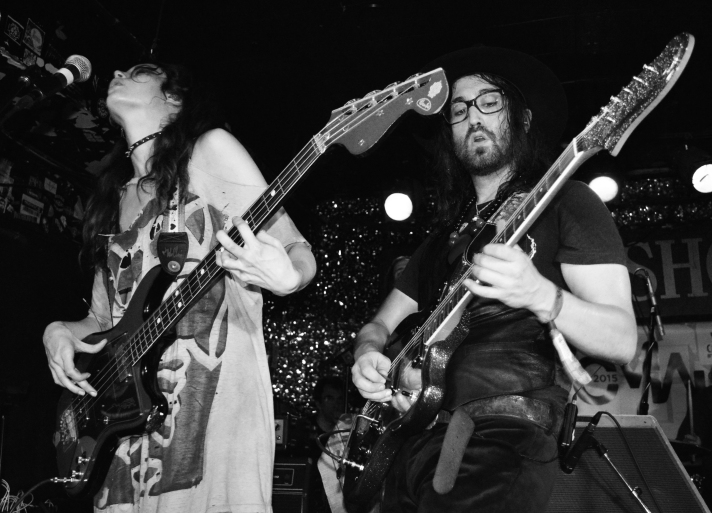 “We are going to get fully naked and cover ourselves in Crisco and play the Canadian national anthem,” Kemp Muhl said about the performance at Canadian Music Week. They didn’t fulfill their promise but they did put on an interesting set. Their far from normal sense-of-self leaks into their humour, music videos and music. Interviewing Kemp surely gives an inside look at the charm and whit that can only be described as indescribable.

The harmonic hymns coupled with the poetic lyrics of the two-piece band, Sean Lennon and Charlotte Kemp, are something out of ordinary. Take the haunting tone of My Morning Jacket and mix it with the Beatles psychedelic influence and you’ll get an idea of, the New York bound band’s sound. The hard to distinguish clash of dark inventive outlandishness seems to be a pure representation of their inner selves. The two are truly rare, in more ways than one.

The band’s distinct sound, according to Kemp, can only be described as, “the sound of a crab slowly committing suicide, run[ing] through some audio delay and an old shoe,” she said.

The duo has gained international recognition for their suicidal-sea-critter-inspired albums, Midnight Sun (2014) and The Acoustic Sessions (2010). With the release of their last album it seems Lennon and Kemp are confident in their sound of harmonic, alternative rock with the ‘60s folk vibe. The solidity in their sound clearly comes from the chemistry in their voices in both performance and heard in each track, they are two of the same with different vibes. The connection between the two is possibly one of the bands biggest aid and the biggest challenge.

“Making music with your lover is no moonlit walk on the beach, but that friction is also what leads us to do our best work,” Kemp said.

The couple has been performing since the band’s beginning in 2008 but has recently been making their way across late night talks shows, blogs and even caught a holy recognition from Rolling Stone Magazine which placed, Midnight Sun, at #33 on the best songs of 2014. NPR took notice of the band placing, Too Deep, on the best songs of 2014 mixtape. The band has also made their way through this year’s summer music festival circuit. Playing this year’s Coachella Arts and Music Festival, Kemp described the experience as,”surreal, hectic and, of course, an honor.” CMW, and the upcoming international festivals including side performances with Beck, Santana, and The Flaming Lips. But with all of buzz about the band, the greatest recognition the band has received, according to Muhl, is from the fans. “A homeless guy gave me the knowing nod the other day,” she said.

Now the band is bringing their sound that is uniquely dreamlike and a constant comparison and contrast of light and airy tones with heavy guitar, or acoustic with soulful voice to Canadian fans which Kemp describes as,“slightly more educated and cooler than your average human.” GOASTT graced the trendy depths of The Horseshoe Tavern for Canadian Music Week May 8th with a crowd first riled up to see John Lennon’s son, once the band began playing, the focus changed immediately to Kemp as she commanded the stage with her sways and utter confidence. With the band touring the world fans can look forward to an oddball collection of music that creates a world and genre of it’s own, with a simple message to take away from each performance.

“—Robots are going to kill us all one day,” Kemp said