Don’t let their boyish looks, charm and ties fool you, these are some wild boys and the girls are lining up to get a front row seat. From Niagara, the four-piece band known as Xprime is made up of four frighteningly entertaining guys— Phil Taylor (drums), Gab Sid (keys/guitar/vocals), Steph Mercier (guitar/vocals) and Neil Carson (bass/vocals).

Haven’t heard of them? Here are some basics: they all sing, they’ve played everything from CMW to Osheaga and they know how to put on a show and get a good time going. Having seen them a few times, there are some striking similarities these boys bring to the table. Planning to see them when they come to town? Well then, take note of the five unavoidable things you’ll experience during an Xprime show. 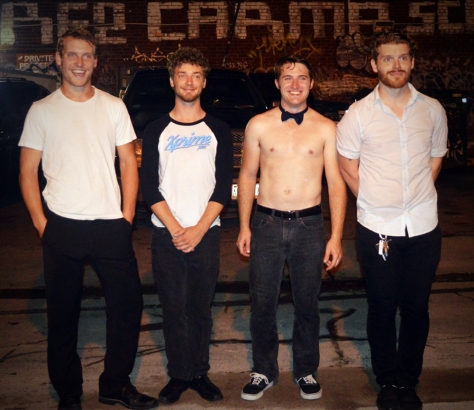 Because, just look at those pretty faces. They may not be a household name quite yet, but there are some very dedicated, (very female) fans who are at the front holding their crossed arms in the air and shouting the name of their favourite member. You can pick them out straight away by the band T-shirts they’re wearing and the adoring smiles on their faces.

2. Someone Will Get Naked.

Okay, okay. Maybe not naked, but skin will be shown. When they perform you can be sure of one thing, a shirt is coming off. They aim to please those super fans. First encountering them at Osheaga, Sid took the stage with a few missed buttons. After a few chants from the crowd encouraging him to loose the garment all together, (that I will neither confirm or deny being a part of) he met them halfway and lost the last few buttons. Fast forward to their performance at The Horseshoe Tavern in Toronto, Sid stayed fully clothed (despite a few requests from the crowd). It wasn’t until their encore song, Are You Gonna Be My Girl, sung by Taylor, that clothes became optional. Leaving his drums behind, he took the front mic, tambourine in hand, and laid into the Jet cover. Though not before his shirt came off and the front row tried to hold themselves together.

You have to see it, to get it. He sort of strays to the side of the stage until it’s his chance to take the mic. But we see you over there, Mercier. Those knee moves getting you all vamped up. Once the set gets going, it’s on. Mercier’s legs seem to get the most out of the music, a little back and fourth as a warm up and then the jumping begins. Once he gets into it, there’s nothing more entertaining. Those hair flips, knee moves and every now and again, that pelvic thrust. (Calm yourselves super fans)

4. The Quirky Entertainment of Gab Sid

He’s the reason the saying “you do you” was invented. The performers are all talented, the fact that they can each play, in most cases, multiple instruments and have great voices, is impressive and makes for a great band-dynamic starting to be seen more and more. Though, no one is quite as entertaining as Sid…he just goes for it. Connecting with the crowd, gyrating around the stage as he sings, plays keys and guitar, you have to wonder where he gets the energy from.

5. They’ll Entertain You or Die Trying…(or at least cut themselves in the process)

Taylor throws it down so hard he doesn’t always come out in one piece. After a show, he realized he’d cut himself after playing the tambourine a little too hard. Osheaga had Sid losing the lens of his sunglasses, though never taking them off, by the end of the set he needed a new pair. Because sometimes it’s not about the music, it’s about the moment. There have been many fantastic bands that sound amazing but fail to connect with their audience and that puts a big damper on the overall vibe. At an Xprime show you can be sure you’ll have a good time. The boys know how to show their fans love. At both shows, even those who weren’t familiar with the band were dancing by the end. Sadly connecting with crowds is a skill many bands lack. There is a skill when a band has the ability to get a crowd jumping and completely involved in their music.