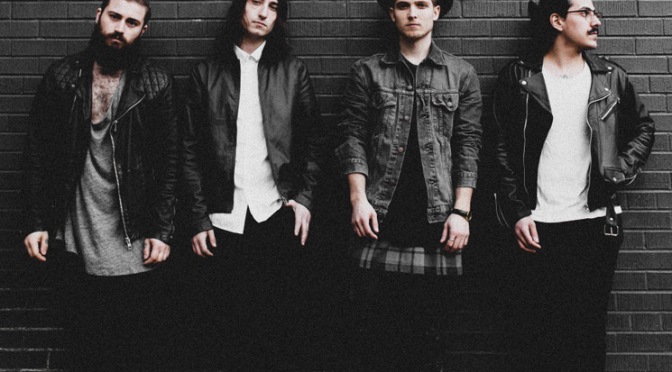 Outside Adelaide Hall in the sketchy brick alley, Curses braved the harsh wind to  answer a few questions using song the titles off of their debut EP, The Bridge. Here is a little taste of the uniqueness that is Curses. With the first show of their Canadian tour only a few hours away, Martin Broda, Daniel Ennis, Michael D. Ferreira and Michael Farina were already dressed to perform. All unintentionally matching in head to toe black and white clothing with some sort of leather accent, the four let their personalities shine and the conversation turned into a laugh-fest after each member revealed a few facts, even they didn’t know about one another.

The question was “What is something that makes your heart stop?“ after Until My Heart Stops. This is what happened:

Farina shifted his stance. “I actually hate you right now.”

Broda laughed, ducking a little closer to the wall he was leaning against.

“I caught a mosquito in my hand and just put it outside.” His pallid cheeks held a faint blush as the seeming dad of the group showed a softer side. Tucking his hands deeper into his leather jacket, he went on. “That’s nothing. Did I tell you about the centipede? I hate centipedes. Hate centipedes.”

“What did you find one let it free?” Drummer, Farina said rolling his eyes.

“No. It was worse. I saved it,” The singer defended. “I saw one and it couldn’t really run because it had a massive piece of lint stuck on one of its legs. I felt guilty, so I was like, I’m not gonna kill you. So with my sock, I pushed the lint off of its leg.

His mates laughed while he hung his head, nodding.

“It probably crawled into your mouth while you were sleeping.” The drummer taunted, but his turn was next.

“Every time I perform. For me, I think every night everything is going to spiral out of control,”Farina said. “After the first song I think, okay, I’m gonna get through this. But for the first song in every show I’ve ever played in my whole life just feels like it’s about to get away from me. That’s just the way I’m built.”

Bugs, and performing itself, one is understandable, while the other is ironic. Moving on to the song titled, Goosebumps, bass player Ferreira revealed a fear that was just plain…special.

The question was “What gives you Goosebumps?”

“Cotton balls,” Ferreira spat out. Ignoring the stares from his mates he went on. “When I squeeze a cotton ball, I can’t breathe. It a weird sensation from the cotton.” He shivered.

So we revisited the cotton ball conundrum Farina couldn’t quite seem to let go.”Like, when you touch it?” he asked rubbing his temple.

“Like it’s fine when it’s at a doctor’s office,” He said pretending to swab his arm.  “But like, if I have on in my hand I just,” he shivered, ignoring Farina’s glare.

“You know what gives me Goosebumps, learning about our bass player,”  the drummer said, still glaring in the bass players direction.

Check out The Bridge to be released on October 16th, where you can hear the songs that prompted all the drama.