If you’ve been watching from the side, you’ve been seeing beer flooding the crowd, crowd surfers high-fiving as they pass one another under the rush of bodies either fighting to stay up in the mosh pit or just fighting. Every one has a smile, sweat trickles down their foreheads. The girls have smudged mascara, and their lipstick is fading.  The guys have their eyes closed and beer stains on their shirts. The band has only just walked onto the stage of their sold-out show.

The band smiles as someone climbs onto the stage, never missing a beat. They play their songs so many have fallen in love with. Everyone jumps, sways, it’s as if we’ve all been old friends getting together after being away for so long. Gritty guitar and and utterly positive vibe, Twin Peaks have always been entertaining to see live. Their shows are rowdy to say the very least, with their latest album, Down in Heaven, the band seems to have grown up. As Clay Frankel’s goofy smile and oddly endearing stage antics still prominently own the set, it’s clear the maturity has only changed their music. 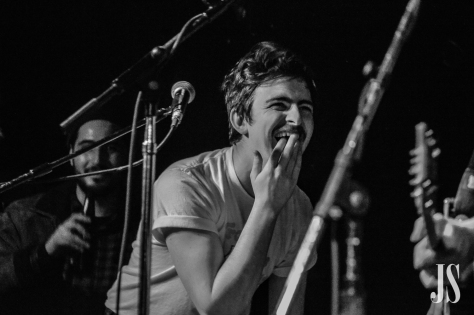