In a slew of darkness, the four arise from the murky depth, otherwise known as the endearingly grimy greenroom at The Horseshoe. The instruments on stage begin cutting through the deafening cheers of mostly girls. They jump, their eyes wide as they stare onto the blackened stage.  Slowly, dim lights show them: Jake Luppen, Nathan Stocker, Zach Sutton, and Whistler Allen. The four youthful men are mid-song, illuminated slightly with an orange light. Their boyish faces juxtapose the oddly mature sound and stage presence.

Landmark, the debut album from the band, released in January, showcases a more mature sound than heard in their previous EP releases. Still danceable, loveable, and thoughtful,the band has an endearing charm on and off stage. When they perform it’s apparently that they are fully submerged in the moment. Keeping a slight distance from the crowd, they’re not strumming their egos, they’re attaching themselves to each part of the song. The focus creates a moment of connection to their upbeat creations, proving again that Hippo Campus are the ones to watch. 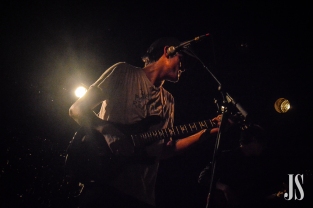