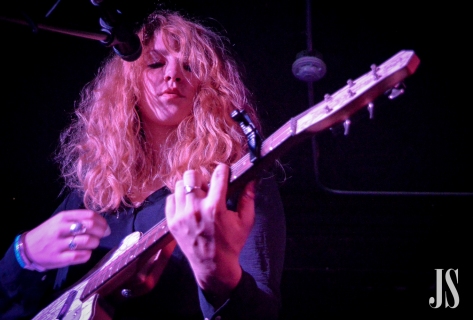 Watch Widowspeak if you dare, but be warned you’re in for a lot more than a show. With all the TIFF excitement and arriving to a room alive with cheers, one would forget it’s a Monday night at The Garrison. Despite the events and the weekday, Widowspeak managed to pull a hefty crowd. Vocalist, Molly Hamilton and guitarist, Robert Earl Thomas offered quick smiles to the crowd before turning on each other for a wordless conversation.

Their latest album Expect the Best released last month, set a comfortable tone of old and new songs mixed throughout the set.

“We’re playing a lot of these songs for the first time in front of people,” Hamilton said. Her saccharine voice sounds slightly raspier live, adding a different sound to old favourites. With her blonde curls, ripped skirt, and voice with a slight edge, there is a tone reminiscent to Bully’s Alicia Bognanno, though a much softer side.

The band sets a very separate barrier between them and the crowd. Straying far from the stage’s edge the band member’s stray towards the midstage. Yet, it only adds to their intimate tone. There isn’t a disconnect from band to audience, it’s a subtle way to draw us in to the intense performance.