Months after cancelling her Toronto show hours before doors, Beth Ditto emerged onto the MOD Club stage to a forging audience. The St. Patrick’s day show began with a slow ballad crushing any reminiscence of a Gossip show. Ditto’s previous band broke up nearly six years before her latest album, Fake Sugar, released. Throughout the show, you slowly forget about the titillating punk attitude as you are enthralled with her new songs. The difference between Fake Sugar is how Ditto’s stunning voice is portrayed. The singer’s dominating intense voice drops audible smirk, instead it’s used primarily for beauty rather than to make a point. At this time in her career, Ditto has no need to prove her talent. Taking on an adult sound throughout the album and taking on genres ranging from disco, rock, pop and even dabble in some country sounds and making each track into a cohesive compilation showcases the genius of Ditto’s work . 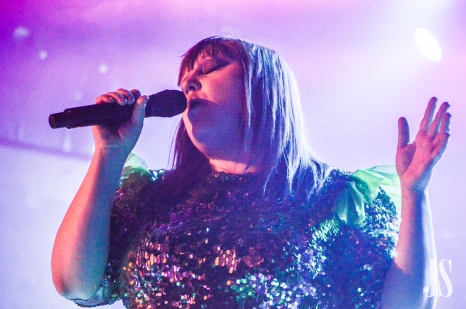